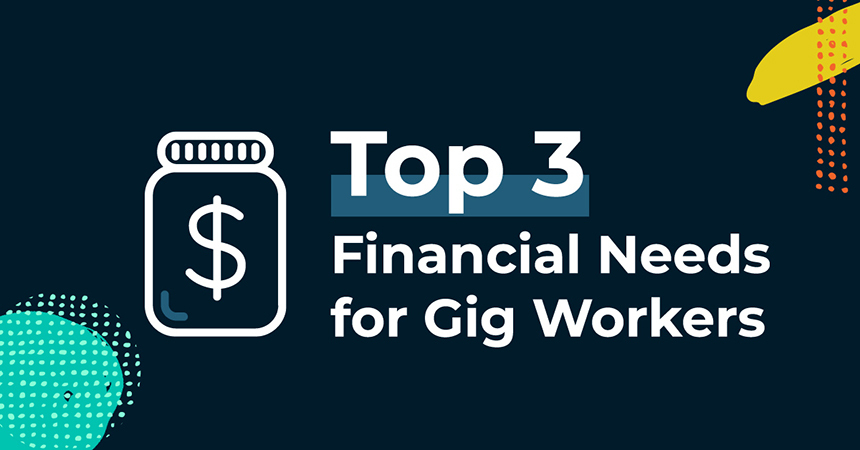 Gig work offers the promise of flexibility and independence to the 93 million gig workers in the United States, but it often fails to provide these workers with traditional benefits of W-2 jobs like benefits, paid vacation time, retirement plans, and a steady paycheck with tax withholding.

So, on top of lining up their own jobs each day, gig workers must also be responsible for securing their own health benefits, saving for taxes, tracking expenses, logging receipts, and setting money aside for the future.

Traditional checking accounts typically don’t offer tools to help gig workers organize their finances, and, even more concerning, gig workers often don’t qualify to open an account because of negative banking experiences in the past.

These 93 million gig workers represent about 36% of the U.S. population1, and there’s a pressing need for a banking solution that addresses their top 3 financial needs.

A two-week pay cycle just doesn’t work for gig workers. According to a PYMNTS.com study, 58% of full-time gig workers said they would have a hard time coming up with $400 to cover an emergency bill.2 It’s essential that gig workers have the option to cash out their earnings immediately after their shift to pay for essential items like groceries, gas, and healthcare providers.

Additionally, gig workers can’t rely on a steady paycheck like W-2 workers. Their workload and pay can vary from day to day, making budgeting extremely difficult.

Gig workers’ financial stress doesn’t live in a silo. It affects the entire economy to the tune of $500 billion a year in lost productivity.3

There’s a financial benefit to the gig platform to offer instant payment — 85% of gig workers say they would work more often if they were paid faster.4

Gig workers’ financial stress doesn’t live in a silo. It affects the entire economy to the tune of $500 billion a year in lost productivity.

Check out our post “What is an Instant Payment?” where we dive deeper into this topic.

2. Support for their unique tax needs

Most W-2 workers don’t have to worry about tax withholding. They fill out a form at the beginning of their employment and taxes are automatically deducted from each paycheck. At the end of the year, they use the W-2 they receive from their employer to complete their tax return and send it the IRS.

In the gig economy, workers alone are responsible for setting money aside for taxes and paying them four times per year to meet quarterly estimated tax deadlines. When gig workers rely on every dollar to make ends meet, it can be hard for many of them to imagine putting 30% of each pay aside. That can add up to thousands of dollars each year out the door. Ouch.

Traditional checking accounts typically don’t have built-in tools to help gig and independent workers set money aside in a separate bucket so they’re prepared for each tax deadline. On top of that, gig workers often don’t know how much they need to save because their income is so variable.

To open a traditional checking or savings account, consumers must provide information for the bank to review their past banking history and credit history. This helps the bank assess the consumer’s risk as an account holder. For most people, this isn’t a huge issue. But it can be for gig workers.

The nature of gig work allows people to move from city to city and pick up work right away. Great for worker flexibility and independence. Not so much for attaining a bank account. Additionally, if a gig worker has a complicated credit history, they may not qualify for a traditional checking account, leaving them without a stable way to receive their earnings.

Offering an account that is easy-to-apply and easy-to-use not only helps gig workers better manage their finances in the short and long term, but it also boosts their loyalty and allows them to focus more of their time on work.

Traditional checking accounts can leave gig workers behind. They need a solution specifically built for them.

indi® was created to address the unique needs of gig and independent workers. Our financial technology platform lets businesses pay workers instantly.5 Your workers can easily apply for an account, get a debit card, save for taxes, and reduce their financial stress.6

At indi, we don’t run a credit check, there are no application or overdraft fees, and our mobile banking tools help workers save for taxes and prepare for a healthy financial future.

indi can reduce the cost and complexity of paying your workers, provide new revenue streams for your business, and meet the unique financial needs of your workforce.7 Ready to learn more? Get in touch with us today.

No comments to show.